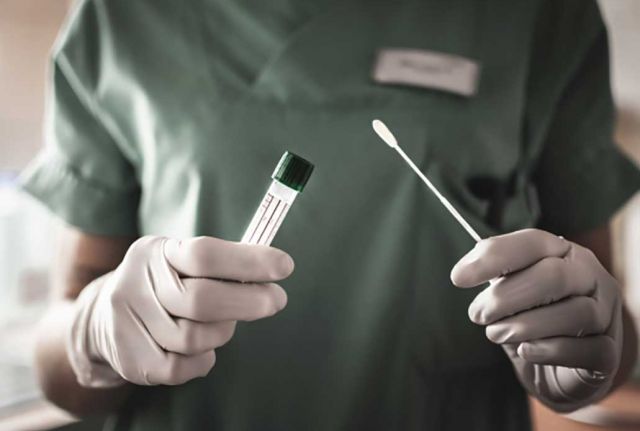 In an effort to study the potential spread of COVID-19 among its students, faculty and staff, UC Santa Barbara is piloting a research surveillance testing program, with a focus on members of the campus community who are asymptomatic for the novel coronavirus.

The volunteer study is a collaboration between UCSB Student Health; the researchers who have developed a CRISPR-based SARS-COV-2 detection system they call CREST (Cas13-based, Rugged, Equitable, Scalable Testing); and clinicians at Cottage Health System and the Santa Barbara County Public Health Department.

Up to 1,500 people will be tested over the coming weeks.

“The voluntary research participants are a sampling of students, faculty and staff that will reflect the broader Gaucho community,” said Holly Smith, a registered nurse and Student Health Services’ infection control coordinator at Student Health.

According to Smith, the test involves a self-collected oropharyngeal swab. “Participants will get a soft swab they gently brush across the tonsillar area and at the back of the throat and then put it in a test tube,” she explained. “All measures for infection control, safety and efficiency will be built into the clinic collection site, with the combined efforts of many campus departments to keep participants and clinical staff safe throughout the entire process.

The samples will then be tested using the CREST assay, which was developed by researchers in UCSB’s Department of Molecular, Cellular and Developmental Biology (MCDB), in response to the testing shortages during the early part of the lockdown. The test’s demonstrated sensitivity, quick turnaround and ability to be deployed in the field makes it an ideal tool to monitor the spread of the novel coronavirus on campus. Results can be available in hours.

“There’s a lot we hope to gain,” said Dr. Ali Javanbakht, Student Health medical director and interim executive director. “We want to learn how to most effectively conduct testing on tens of thousands of people; get a sense of the presence of COVID-19 in people without symptoms and improve the turnaround time of tests run on campus.”

Because CREST was developed in a research setting and not a clinical one, the assay currently is being used for surveillance testing only, not diagnosis. The test is aimed primarily at potentially asymptomatic carriers; those experiencing symptoms will be tested by Student Health using the traditional protocol.

“The presence of the virus in the respiratory tract of individuals with no symptoms, or atypical symptoms of COVID-19 has been well documented,” said researcher Carolina Arias, who with colleagues Kenneth S. Kosik , Diego Acosta-Alvear and Max Wilson developed the CREST assay. “The asymptomatic carriers can inadvertently transmit the virus to others, increasing the potential of covert outbreaks. Surveillance testing will allow us to detect these cases early and take preventive measures to protect our community.”

Privacy rules prohibit the results of each test from being linked to individual names so the UC Santa Barbara research team will not be able to identify the person associated with any particular sample. However, every collection for the CREST assay will be accompanied by a collection for the traditional qRT-PCR test, so should a result come back positive, the coded information and sample will be turned over to Cottage Hospital clinicians who will access a protected database to find out who the person involved is and turn that information over to the Santa Barbara County Public Health Department (SBCPHD). The results will be confirmed with a diagnostic qRT-PCR based test. SBCPHD officials will contact the individual to let them know they should isolate themselves. It also will trigger a contact tracing procedure to assess who, per guidelines established by the Centers for Disease Control, “was within six feet of an infected person for at least 15 minutes, starting from 48 hours before the first positive test was seen until the time the patient is isolated.”

“Our surveillance study with 1,500 participants will allow us to fine-tune our CREST protocol for scaled-up testing,” said MCDB assistant professor Acosta-Alvear. They have cross-validated CREST against CDC-approved PCR reference tests and are now working on further optimizations, he added, including alternative methods to isolate viral genetic material as well as test automatization. “Testing at a campus-wide scale will bring new challenges, but we are optimistic that we will be able to address them in our effort to help our community.”

The ability to conduct widespread testing is critical for the campus and its community, as businesses, schools and other institutions restart their operations after more than two months of Gov. Gavin Newsom’s stay-at-home order. Santa Barbara County’s infection rates have been relatively low, due in large part to the lockdown and effective social distancing, but without proven medical interventions, COVID-19 spread is still a serious issue. Concerns remain over a potential second, deadly wave of infection that could occur in the fall, around the time students would normally be returning to campus.

“With further validation, the campus testing will allow us to detect single cases and test contacts before the virus undergoes exponential spread,” said MCDB professor Kenneth S. Kosik. “Think of this as putting out spot fires.”

Meanwhile, the researchers overseeing the test hope for results that would ultimately yield insight into the virus, and effective response.